By the end of one year there are recaps almost everywhere: papers, magazines, radios, tv… So, there’ll be one here on this blog, too. It might also give a nice insight to my life during the previous months and help to “get to know each other” better. So, here I go:

January
Just right after I found out I was pregnant, morning sickness of THE worst kind hit me. In the mornings and also for the rest of the day. I knew it from my first pregnancy and almost forgot about it when I was pregnant the second time. But with this one it was worse and harder and uglier than ever. And it lasted 4 full weeks ( and was sooo worth it in the end, see “September”)

February
Snowy, cold, winterly vacation with hubby, the kids, my parents, brother and his girl in the mountains. We spent lots of extra-alone time with Paulina and Johann. Before we took of for the snow, Paulina got her first (ever) school report and made my proud mother-heart almost burst!

March
Mmmh… hard to remember actually. I focussed on my semi-annual exams and planned the next vacation. And we found out we ware going to have another boy!

April
We spent 5 fabulous days at friends’ in Italy, near San Remo. It was Italian life style at it’s best and we had so much fun, food and wine (no, not for me!) and lived in a house which was several hundreds of years old. Johann turned 4 and we spent the easter break at our holiday house with my in-laws. 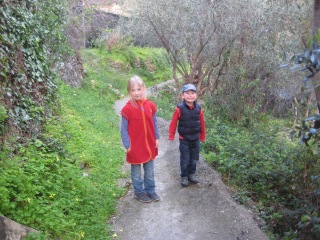 May
May passed as a somewhat normal month. I joined and quit a pregnancy-yoga-class (thank God I decided not to buy the full pregnancy-yoga-wear-package in advance!), my tummy grew bigger, the little baby monkey inside kicked to contact the bigger monkeys. We spent a long weekend with a very close friend in our holiday home by the sea and enjoyed the first beach days of that year.

June
My big monkey Paulina turned 7 that month! Unbelievable, time sometimes really flies. She was given to 2 guinea pigs which she named Pippi and Lotta. We had a family party at home and a kids party one week later visiting Paulina’s horse farm and having a BBQ at the beach afterwards. At the end of that month the school year was over (Paulina’s report was as fabulous as in winter!) and summer break started.

July
July turned out to become the longest and most stressful month of the year. The weather wasn’t at all summerly, I was stuck at home – highly pregnant (and slowly being sick of being pregnant), with 2 bored kids, hubby at work almost 24/7 … and there were sooo many more weeks to come. A spontaneous trip to the beach house accompanied by dear friends and a sick-at-home hubby brought THE change of speed and mood. We had wonderful days at the beach, long nights on the terrace or with a girly DVD and the kids finally got what they deserved: a summer vacation.

August
Back-to-school-month, baby-countdown-month, lots of birthday parties and anniversaries. I was getting more and more impatient for the baby to arrive – but it didn’t help. He took his time and the wait was worth every single minute.

September
On September 9th, a sunny late summer sunday, our third child was born. Everything went as perfect as it possibly could and everyone instantly fell in love with this little boy who looked so different from his siblings and was yet so obviously one of them. I was – again – struck by the magic of birth and the wonder that was inside my tummy one minute and out in the world the very next.
The first weeks as a 5-person-household went really smooth, the bigger monkeys were delighted to finally have their little brother at home and they took really good care for him (“You ARE allowed to touch him gently, but only if you wash your hands!” was Johann’s favorite quote those days). 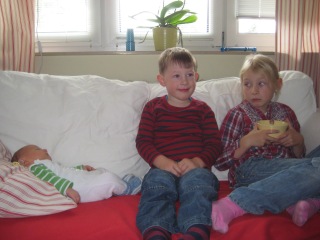 October
While Paulina went to Paris with my in-laws, hubby and I decided to spend some nice days in the capital with the boys. We had exciting post-summerly days and really did all the tourist stuff one can do with children.

November
This month was quiet and smooth in retrospective. Jakob had settled into a routine that fit our life, I got a number of things done around the house (e.g. bought and built a new kitchen drawer) and I organized all x-ms presents right on time before the actual christmas hustle and bustle started.

December
December (like almost every year) really hit us hard on the health side. Johann was really down with the flu for more than a week, I felt sick every now and then but – of course – didn’t have time to recover. Paulina had a bad cold and was permanently on the edge. The week before Christmas it was Jakob who got really sick for the first time. He was coughing and breathing heavily, my poor baby! It turned out he was suffering a bronchitis and had to be put on antibiotics for 10 days. Though it was a hard time and I was sick of worrying Jakob coped really well and now he’s fine and happy that medication is over.
Christmas was stressful due to all the sick people in the house (hubby got sick, too) but we made the best of it and had our traditional family dinner with my parents, in-laws and aunty on Christmas Eve.

Wow, now that I’ve written all that down it seemed a pretty “full” year. And this is just a part of it. My hubby had (and still has) to undergo so much trouble at work and there’s still so much to do. But I am so sure that in the end it will be all worth it, because the harder you have to fight the better the result. Or at least I really, really hope so. Despite the stress and trouble and fears he had, he was always supporting me and the kids, trying to make time for us whenever possible. I’m really blessed with that man.

Wish you all a good and successful start in 2013. There will be many more stories to be told on this blog, that I can promise.

Newlywed. Someday mom. Reliant on the one true God.

Baking Joy Into Every Gluten-free Bite

No gluten. No soy. No problem.

Learning to cook from the heart, for the soul.